KERALA TO LEH THE RIDE OF MY LIFE

KERALA TO LEH THE RIDE OF MY LIFE

KERALA TO LEH - THE RIDE OF MY LIFE

As riders, we always day dream about going on a long motorcycling road trip with like minded people, exploring the world without a worry.

Arjun Raju is one such rider. Last year, he realised that he had been day-dreaming about  taking his Himalayan from Angamali, his hometown in Kerala, to Leh for way too long  now.

‘What’s the point of making plans, if you’re never going to do it? So I decided to  stop planning and start doing.’ recalls Arjun.

Once you start doing, there’s no stopping. Plans were put in place for the epic journey  with two other riders who were itching for an adventure.

‘I’d met them at a Royal Enfield ride, and we had been talking about doing this ride  for a while. We finally decided to take a break from from work and daily routines,  and charted out the journey quickly on a con-call.’

After the plan was locked, Arjun had about a week to get ready for the ride. This included  getting leaves sorted out, getting the motorcycle serviced and prepping his gear.

When the day finally arrived, Arjun and his friends headed out from their hometowns in  Kerala with their compass firmly pointing north. Thus began a 20-odd day journey from  one end of the country to another.

Since the three riders had explored most places in their vicinity, they skipped any stops in  the south. They took pitstops at Bengaluru, Goa, Pune and Mumbai before crossing into  Gujarat and Rajasthan. Throughout the ride, they relied on fellow riders from the  community to get help on accommodations, places to eat and general queries along the  way. They finally reached Delhi, where their motorcycles started giving them a bit of  trouble.

The trio spent a couple of days in Delhi, explored the city, got their motorcycles looked at,  and proceeded on towards Chandigarh. They faced some trouble with the motorcycles  again, and looked for a Royal Enfield service station. Since it was a Sunday, they  expected the garages to be shut. However, they were helped out by a kind service centre  owner in Chandigarh, Harbhajan Singh, who got their motorcycles fixed for free.  Harbhajan also supported and encouraged them on their long journey and shared his  phone number with them in case anything went wrong along the way.

They moved from Chandigarh with the Himalayas on the horizon, and rode up to Manali.  In Manali, they spent a couple of days exploring the unique culture and lifestyle of the hill  town and exploring the natural beauty of the Himalayas on some off-road trails. From  Manali, they made a short journey to Keylong, soaking in the views along the way.  Keylong was their last stop before their destination of Leh, and Arjun was jittery with  excitement.

He was also jittery on the day of the ride because the journey from Keylong to Leh turned  out to be a cold, rough one. While his Khardung La V2 riding jacket kept him safe from  the elements, he struggled to ride in the snow. 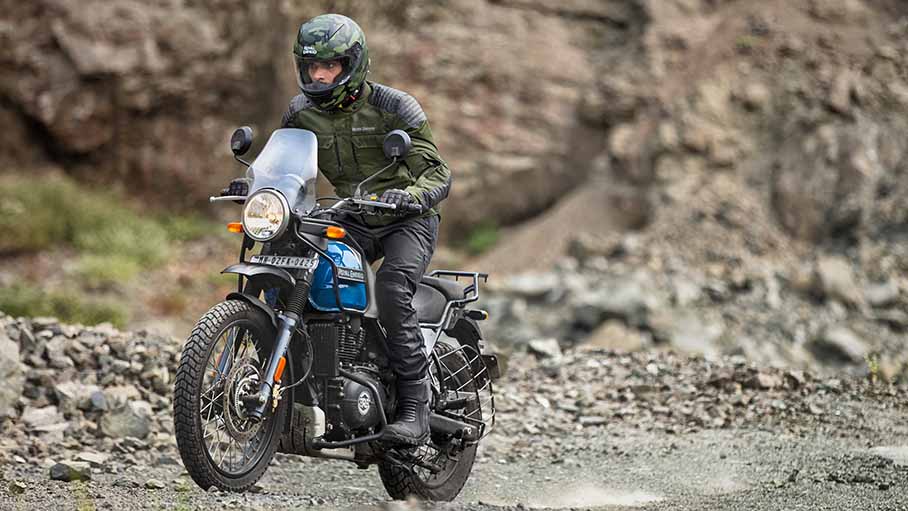 ‘It was extremely difficult to ride with snow and ice on the road. We struggled to  make ground and eventually reached a dead-end. The road to our destination was  closed due to heavy snowfall.’

To say that Arjun was disappointed to be turned back on the last leg of his dream road  trip would be an understatement. But he did not let that disappointment dampen his spirit  for adventure. He had a few days left before he had to get back to work, so he decided to  head to explore the Himalayas more.

He experienced the breathtaking beauty of Parvati Valley in Kasol, before riding through  Haridwar and Rishikesh, where he quenched his thirst for adventure with river rafting and  bungee jumping.

Refreshed and reoriented from his epic journey, Arjun transported his motorcycle back to  Kerala from Delhi to make it back to work on time. Now, back in his daily routine again,  Arjun is glad that he took an impromptu decision to do the journey of his dreams.

‘Buying a Himalayan was the best decision I’ve ever made. It has changed my life,  given me plenty of memories and introduced me to people I will cherish for the rest  of my life. Taking it to its natural habitat in the Himalayas had always been a dream  for me. Now, I can proudly say that I’ve been there, done that!’

Are you prepared to have a great adventure?

Recent Posts
Journeys expressed through art | The Story of AOMS2
ROYAL ENFIELD X TCX STELVIO BOOTS
KERALA TO LEH THE RIDE OF MY LIFE
Are you prepared to have a great adventure?
Make the best of your mountain rides.