After being locked down for months, waiting for things to get normalised, the mountain bug found me, bit me, long and hard. So desperate to get on the roads, I decided to do a solo ride of around 3,500 km from Guwahati to Jispa in Himachal Pradesh via Delhi.

Looking back, I can predominantly categorise the ride into two categories based on the terrains. Guwahati to Delhi was about plains but the learning curve for someone who wishes to do the same route, won't be as flat as the terrains. To reach Delhi, one has to ride through West Bengal, Bihar and Uttar Pradesh. Things don't get much interesting until you reach Bihar.

I, along with the Royal Enfield Himalayan decided to do the Guwahati-Delhi stretch without halts (of course, there were multiple stops) and ended up being in Bihar after dark. Please avoid riding through the state at night. The broken roads or precisely highways were treacherous without any streetlights. The stock Himalayan does have a decent throw to illuminate, but it was challenging. This is when I felt or rather connected to my riding gears as it seemed to be the protective bubble that disconnected me from all the wild thoughts that ran through my mind as I kept crunching miles. I was donning a Royal Enfield Nirvik jacket and a Royal Enfield Tso Kar Riding Pant along with a pair of Royal Enfield Stout Gloves. I have riding gears of all prominent brands, but the built quality of these gears were far better than the others I have. It is important to have good riding gears while you ride for it is to you what the tyre is to the motorcycle -- the point of contact with the outer world. 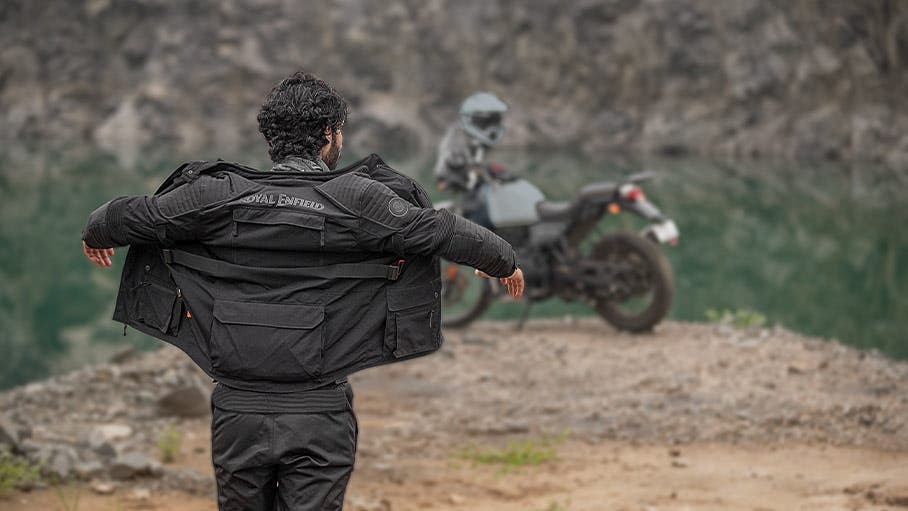 Around 3:00 am, about 250 odd km from Gorakhpur, I stopped at a ramshackle roadside eatery and kept imagining what could have gone wrong if I or the motorcycle had any issue as I munched scrumptious 'aloo parathas'. Immediately after the stop, I topped up the fuel tank and was all set for a long stretch to Delhi via Ayodhya. From thereon to Delhi was all about keeping myself wide awake. I was not sleepy, but at certain points, you do tend to feel lethargic on such long non-interesting rides!

The roads in Uttar Pradesh were like an elixir to me given the kind of streets I was riding on for the last 24 hours. Beautiful long stretches for most of the onward journey towards Delhi via the Agra-Lucknow Expressway and the Yamuna Expressway. These are probably the only two roads in India where motorcyclists need to pay toll charges, but every penny spent is worth the ride.

By the time I reached Delhi, I was exhausted. I altered the plan and extended my stay in the Capital by one extra day. My plan, as decided, was to go to Darcha, but there were repeated incidents of landslides across Himachal all over the social media. Okay, challenge accepted. Let's make it more fun!

I swapped the Himalayan with a Meteor 350 and was ready to comprehend how well this urban motorcycle would do on the hilly terrains. My gears remained unchanged. But as the forecast showed, it was overcast conditions for most of the ride. All set for the second leg!

En route Chandigarh, it was a warm day! The ventilation on my jacket did wonders. The vents on the front and rear ensured I was not sweaty, but what I feel was missing was probably vents on the arms. Nevertheless, it helped me cool down even in the scorching sun. From Chandigarh, things were different. It had started pouring. The forecast didn't look good either.

The rain cover that comes with the jacket came to my rescue but to my disappointment, I didn't carry a shoe cover at that time. Neither my gloves nor my shoe was water-resistant. Water had sipped in and by the time I pushed towards Manali, temperatures had started to drop and I became physically challenging with my shoes and gloves drenched in rain. Until Jispa, there was no respite as the downpour persisted and I kept pushing my limits.

I desperately missed having a pair of heated gloves and waterproof riding boots. If I had these two during my ride, along with a rain cover for the pants, things would have been much smoother even in the rains. Maybe for the next ride, I will have this sorted.

Came back to Delhi in a couple of days, but with a heavy heart and memories to cherish despite all challenges. Wear all your riding gears. If possible, be selective of the gears you wear for specific rides. The same set of gears that were comfortable enough from Guwahati to Delhi, posed a different challenge when the landscapes changed. Until next time, ride safe.